For my 3rd-yr classes – First ever recording of computer music

First ever recording of computer music-“God Save the King”, “Baa, baa, black sheep”, “In the mood” – Alan Turing, BBC Studios, 1951 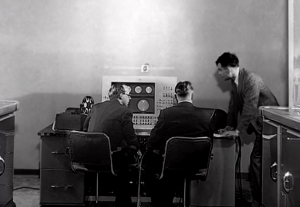 As for I was telling you about in class, here’s an interesting BIG FIRST STEP of the “cross-over” between arts.

Though not so “groovy” and catchy it represents the beginning of a new era for many modern artists.